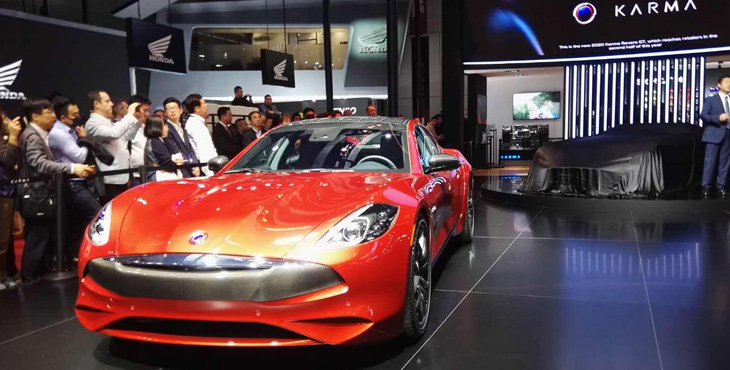 Chinese electric vehicle makers have proliferated in recent years, with dozens sketching ambitious plans to enter the market. Some of the top competitors have spent millions showcasing concepts at places such as CES to ensure they stand out amid a crowded field.

Bordrin Motor Corp., on the other hand, has been content to keep quiet."Why would you spend millions at CES when you are years away from selling a car?" asks Jerry Lavine, the company's North American president. "We have investors. We haven't wasted work just to build a show car."Since its founding in 2016 by former Ford senior engineer Ximing Huang, Bordrin has concentrated on building real cars. The results of these first efforts will soon be seen by outsiders for the first time. This week, the company will unveil its first production model, the B31 SUV, along with a premium-segment concept that Lavine says is "pretty damn feasible." The debuts will take place Thursday, April 11, at a company event that precedes the Shanghai auto show, where the public will see them starting April 16.Production is slated to begin this year on the B31, with automaker FAW Group scheduled to build the SUVs for Bordrin at its assembly plant in Tianjin, China. The company will begin taking orders during the Shanghai show, with deliveries expected to begin in the first quarter of 2020.

No pricing has been announced, but Lavine says the vehicles will be priced on a par with domestic Chinese brands, while comparably equipped and at quality levels akin to Tesla and the Audi e-Tron. The premium vehicle, called the C31, is expected to enter production in 2021, with a full ramp-up planned for 2022.For now, Bordrin is squarely focused on China, where it will sell cars through company-owned stores. A European rollout will follow, with an initial focus on EV hotspots such as the Netherlands, Germany and Norway. Eventually, the company intends to sell vehicles in the United States. That has been an ambition of numerous Chinese automakers, but Bordrin at least has a presence in the U.S. A team of more than 90 employees works at the company's offices in Oak Park, Mich., developing driver-assist systems, chassis and body structure. Multiple offices in China employ more than 1,000.

If the idea of yet another Chinese EV company joining the fray conjures a ho-hum response, consider the company intends to announce a range of 550 kilometres on the B31, or nearly 342 miles. That kind of range would be better than some high-profile competitors such as Byton and Nio, but Bordrin vehicles will be cheaper.

One thing that separates Bordrin from the broader swath of competitors is that it develops much of its battery-cell technology and its battery-management system in house, and it is focused on wringing improvements that address customer pain points."We think charging time and range are really the two tipping-point items," said Lavine, 50. "If you can get people to three to five days without charging, range anxiety is gone. If you get an 80 percent charge in 45 minutes, they'll also be OK with it."Ensuring that 342 miles is an achievable figure on an everyday basis — not merely an optimal one — is a key benchmark. To that end, engineers have conducted cold- weather testing in northern China and will soon expand such testing to New Zealand in hopes of tempering battery loss in cold-weather conditions.

Bordrin engineers are trying to eke improvements from the rolling resistance of tires, the drag of calipers on the rotor and generally squeezing weight from their vehicles. There's no magic formula, said Lavine, who came to Bordrin from Magna International, where he was vice president of advanced product development. Before that, he worked at Dura Automotive Systems, Henkel Corp., and Next Autoworks, as well as 15 years at Ford.

Those experiences helped inform his viewpoint that there's a lot to be said for — and gained from — incremental innovations. Skipping the flash of competitors and infusing their decision-making with a no-frills sensibility has been the biggest differentiator for Bordrin.

Rather than equip its cars with touch screens across the entire dashboard like Byton, Lavine says, "We would tell you we're trying to solve real-world customer problems. We're not trying to be gimmicky. We want to be what people want and need, and practical."Along those lines, Lavine says, the company initially intended to put a roof rack on its C31 concept. But in more than two dozen visits to Shanghai, he says, he never saw motorists in traffic using their roof racks. That touched off a debate with his team on whether the vehicle should have a roof rack, which adds weight, cost and aerodynamic drag. It was a reminder they don't need to follow well-worn scripts."It was, 'Well, it looks better,' and then we had to say, 'Well, then styling needs to make the car look good without the roof rack," Lavine said. "If the customer is not going to use it, why put it on?"

None of that's to say the vehicles are spartan. The B31 SUV will debut with a Level 2 driver-assist system developed by Bosch, which will provide a feature akin to Tesla's Autopilot or General Motors' Super Cruise.